Would you like to switch to the accessible version of this site?

Don't need the accessible version of this site?

Gestation Sows on Pasture
Before the 1960s, most pork in the U.S. was raised in outside lots or on pasture systems. With the development of slotted floors and liquid manure handling equipment, it became possible for producers to more easily care for larger numbers of animals and to provide more protection from the weather. Enclosed buildings overcame most weather problems, predators, and minimized the potential pollution from outside lot runoff. It also made it practical to farrow sows twice a year, rather than once. This was the beginning of intensive production schedules on relatively small areas as found throughout the world today. 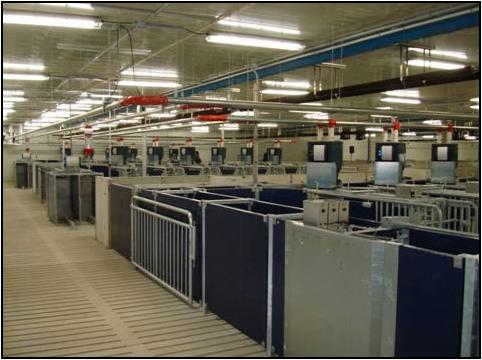 In a continuous flow barn, animals of many different stages of development may be housed in close proximity to one another and the facilities are never empty. The chief advantage is that space is efficiently used, because pigs can be moved to larger pens as they grow, and new arrivals replace them in the smaller pens. Continuous systems are also simple to plan; if the producer wants to wean two litters each week, two sows must be bred each week.

Disadvantages are that different ages of animals (with different degrees of immuno-competency) are housed together, facilitating disease spread; stress levels can be heightened with changing social groups; adequate cleaning and disinfecting are not feasible; and higher levels of antibiotics and other medications are normally required to control disease.

Most swine today are raised in all-in, all-out (AIAO) systems, where each room or building is completely emptied and sanitized between groups of pigs. The pigs in each group enter a freshly disinfected environment, and stay there for this phase of their life. The facility has a separate room or building for each group of pigs weaned, with extra space if needed to allow workers time to clean the room before the next group of pigs. AIAO animals in each room are of a uniform age and size and are isolated as much as possible to decrease the possibility of diseases spreading from older animal groups to younger ones.

The primary advantages are that disease spread is minimized; animals are less stressed because they remain with the same age and social group throughout their development; and complete cleaning and disinfecting between groups is possible. The disadvantage is that space is less efficiently allocated, and that more space may be needed to allow rooms to be emptied for cleaning between groups.

Until around 1990, swine production systems were usually housed on a single site; because of labor savings and convenience. Health concerns have since caused many swine operations to house the various production phases at different sites to further minimize contact between pigs of different ages. This is either a two-site or a three-site system. A two-site system has breeding and gestation at one site and farrowing/nursery and grow-finish pigs at a separate site, while a three-site also places the nursery at a separate site.

In the last few years, some producers have constructed wean to finish barns where pigs go immediately after weaning and stay until market. This combines the nursery and grow-finish phases of production. These barns provide substantially more space per pig than is needed initially, but provide the advantage of only moving pigs once during their lifetime. This reduces stress on the animals and saves labor since buildings are not cleaned until the hogs are marketed.

Find us on the map